I went to a business conference

Let me just start out by saying, no, I am not a business person. Business on a whole bores me, and current digital trends in the business world — particularly as they are concerned with data mining, advertising, and digital profiling — really, really bother me. Business and technology scare me... but really, that's another post altogether. What I do want to talk about here is the fact that I actually went to a business conference. What's more, I didn't hate it.

So why, if you so dislike business, were you at a business conference, Keefer?

TL;DR: By some luck, I got sponsored to go to attend OCE Discovery with Kyle, and we said, "Sure."

Back in November 2015, Kyle Farwell and I got so fed up with traditional social media and the way they handle their users and content, that we made our own alternative. Several months of work later, we had Tokumei — a free/libre, self-hostable anonymous microblogging platform. Tokumei has full feature parity to Twitter and GNU Social, except that it has no tracking and no user accounts on a default installation.

So, with a feature-complete software product behind us, sometime in mid-to-late 2016, Kyle and I began actively advertising Tokumei on image boards and discussion forums throughout the web. We had interest from several developers and privacy centric nerds who wanted to run Tokumei sites over Tor, I2P, and on the clearnet. The Tor sites did not last long but were surprisingly civil, I never looked at I2P, and was surprised by the popularity of the clearnet sites (of which I know three were run in the USA, UK and Singapore).

When Kyle and I headed off to university in Fall 2016, we continued to show off Tokumei to fellow students, developers, and faculty at our respective institutions. We talked to the right people, and for some reason the Sault Ste. Marie Innovation Centre (SSMIC) nominated us for a scholarship to attend the Ontario Centres for Excellence annual Discovery conference. We got it, and travelled to Toronto for the conference to show off our software.

Arriving to Toronto late on Sunday night, we stayed in some cheap University of Toronto dormitories and woke up early to set up for the conference. Being too cheap and stubborn to figure out transit, Kyle and I made a 45-minute trek across the city by foot — during which I discovered my never-before-worn dress shoes were a size too small, and Kyle discovered that suitcases are best when they are manufactured with wheels.

I arrived at the conference registration desk with blood-shot eyes, wind-messed hair, painful feet, wearing my Tokumei branded t-shirt under my blazer, probably looking slightly crazed and out of place among professionals in full, custom-tailored suits. Despite this, registration went smoothly and Kyle and I lugged our projector, five heavy laptops, and other miscellaneous items (that we carried across the city) to our booth at the front of the "Youth Zone."

Here, we set up what we thought to be a flawless display... until it was pointed out that our projected media was shining through the back-drape of our booth, visibly projecting a reverse image into the booth behind ours. Kyle then had to run downtown to find adequate amounts of tape, paper, and string while I guarded what amounts to several thousands of dollars of technology that were acquired over the years (by Kyle, myself, and our family members who loaned devices to us), so that we could craft a makeshift projector screen. The final result looked like this: 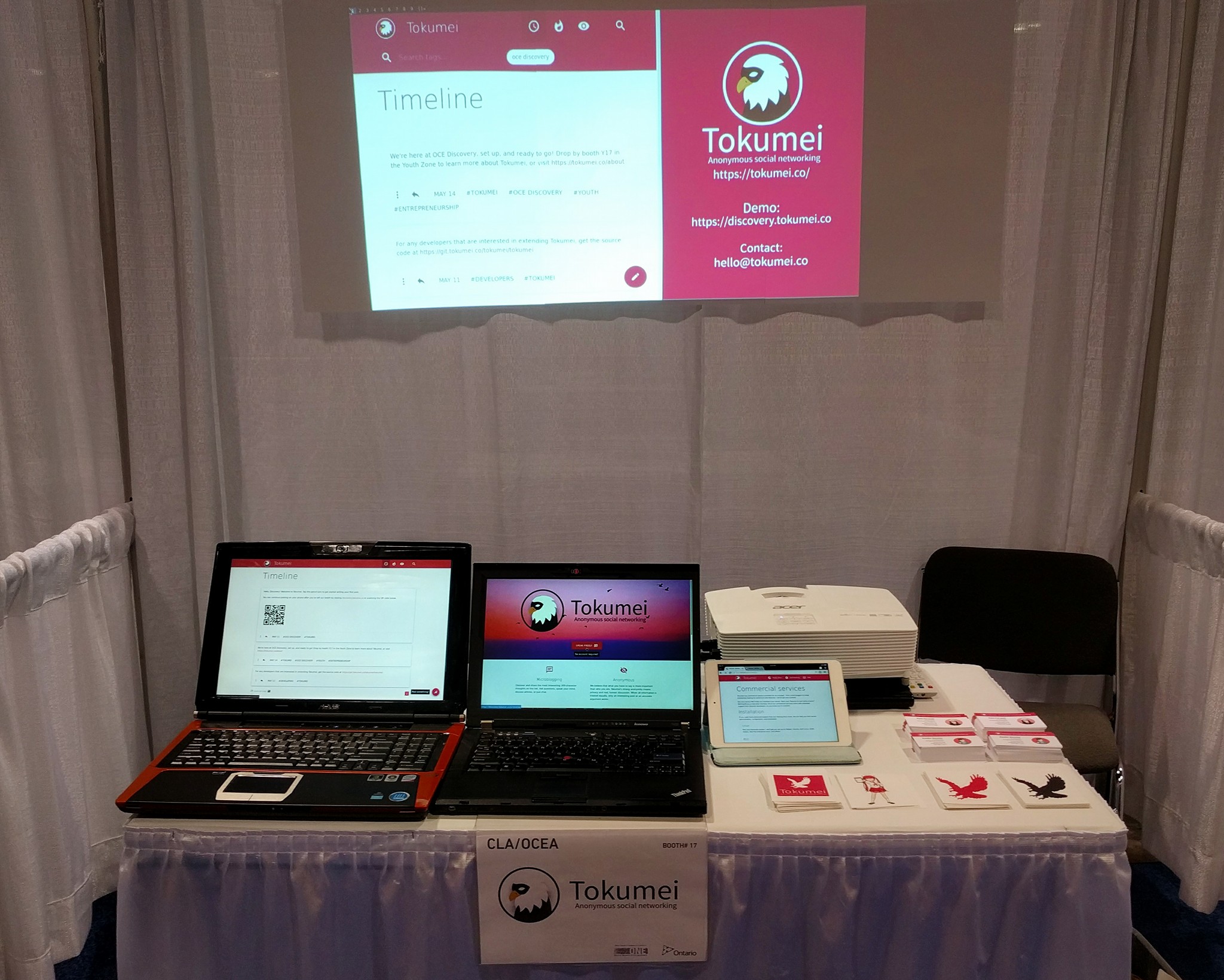 With setup out of the way, I ran to get us subs for lunch, and we proceeded to the banquet hall for opening ceremonies. To put it bluntly, we expected to be bored, and would have skipped the ceremonies were we not ushered out of the exhibition hall. It was here however, that we discovered that the conference actually did have a pretty good technology focus, so we weren't too bored. The talks were sensationalizing — throwing buzzwords around too liberally — but also somewhat informative on the latest trends. Many of the speakers were quite good, and I especially enjoyed the inspiring talk that our Governor General gave on Canadian economics and technological innovation along the Waterloo-Toronto corridor. There were also a few good quotes that I took down here.

I also got yelled at by waitstaff for trying to pour my own coffee — oops.

Heading back to the showfloor, people started coming by our booth. Their initial reactions were usually first, intrigue, then confusion. Anonymous social networking, without user registration seemed to be a hard concept to grasp after Jared Cohen just told everyone that data is the new oil — Tokumei is designed to deliberately strip away any metadata which may possibly identify a poster, including the time at which a post is made. Some people got it, many people didn't.

Prior to this conference, Kyle and I had only really demonstrated and explained Tokumei to fellow developers. I gave a presentation at the University of Guelph, which got the attention of some of my professors and eventually landed me a job. However, the typical, slightly scattered/unstructured pitches that we were used to delivering had to be refined over the course of the day to better suit the crowd. While many exhibitors were showcasing tech, and the opening talks were fairly tech focused, it was clear that the business crowd on the floor needed a different approach, and a different pitch.

Eventually we got the hang of it, and people started taking our cards (and our stickers!).

I got ready in the morning, ensuring to wear my more casual, far more comfortable shoes, and swapped my dress pants for skinny jeans. Rather than half-assing an attempt at professionalism as I had on the first day, I decided to dress more like myself. Turns out that skate shoes, skinny jeans, a graphic tee, and a blazer is a good look.

Dressed more like a developer, less like a child in business clothes, and ready for another day of pitches, I took a stab at Toronto transit with Kyle. The fare boxes were offline, and the software running them appeared to have segfaulted — as a result, we got free transit fare. Nice.

The conference provided a pretty nice lunch, even though they tried to serve me chicken twice (I had a vegetarian meal card!) and some nice people sat with us (though we didn't really say much). Discovery took this opportunity to give more keynotes, this time focusing more on clean tech, closed-loop systems, and sustainable practises. Gina McCarthy (former EPA under President Obama) assured us that despite current government in the south, Americans maintain strong environmental policy — I am not sure I believe her however.

When traffic slowed down, Kyle and I took an opportunity to explore the rest of the conference, amassed a good collection of stickers from other tech companies, and returned to our booth to find that we were nearly out of our own stickers. Surprisingly, our Tokumei-chan stickers (of which we ordered the least) were the most popular. We had none left by the late afternoon. I guess people prefer anime girls to edgy looking eagles.

When we left the conference, the tram fareboxes were still broken, so we rode back to our dorms free of charge thanks to whatever terrible Java application that failed to recover on those machines. Overall the conference was a good experience — I met a lot of neat people, had a fair bit of fun, got to polish my pitching and communication skills in front of an audience of non-developers, and advertised my first software product that has the potential for commercial viability.

— Dr. Gina McCarthy (on the subject of climate change, and clean tech)

People like beer; if you are planning on running a large event like a conference, consider giving out free beer (or secretly including it in the ticket price).

Make cool things so that people will pay for you to go places.

Erase preconceptions, because people can and will surprise you.

Always show up early, because you never know have much paper, tape, and string you might need to buy last minute.

500 business cards is too many cards. 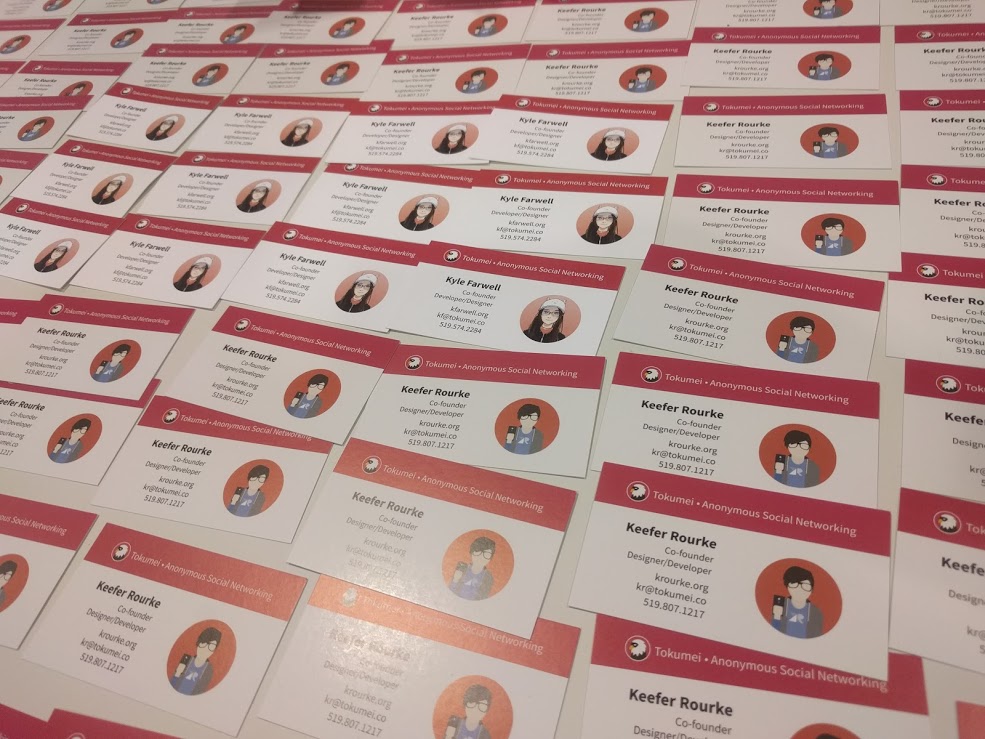